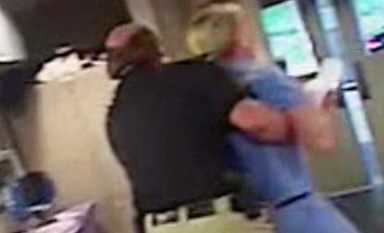 Will the Nurses Practitioner Association get involved?

Where do we draw the line between civil rights, employee duties, patient rights and the police. Right is always right , but is it a precpective or situational filter?

“I was alarmed by what I saw in the video with our officer and Ms. (Wubbels),” Salt Lake City police Chief Mike Brown said in a news conference Friday. “I am sad at the rift this has caused between law enforcement and the nurses we work so closely with.”

Salt Lake City police apologized Friday for arresting a nurse who, citing hospital policy, refused to let officers draw blood from an unconscious crash victim. The arrest of Alex Wubbels, who was later released without charge, was captured on body camera video that the police chief said was alarming.

The incident happened July 26, when a crash victim was admitted to the University of Utah Hospital burn unit in a coma. Though the man was not a suspect in the wreck, which killed the other driver, police asked for his blood to be drawn.
Wubbels, the charge nurse in the burn unit, presented the officers with a printout of hospital policy on drawing blood and said their request did not meet the criteria. Hospital policy specified police needed either a judge’s order or the patient’s consent, or the patient needed to be under arrest, before obtaining a blood sample.
“I’m just trying to do what I’m supposed to do. That’s all,” Wubbels tells the officers, according to the body camera video.
Wubbels’ attorney, Karra Porter, said Friday the university and Salt Lake City police had agreed to the policy more than a year ago and “the officers here appeared to be unaware of” it.
“There’s no dispute that the blood draw policy was jointly prepared and in effect for quite some time,” Porter told CNN.
After Wubbels refuses, the video shows Salt Lake police Det. Jeff Payne walks quickly over to Wubbels, who backs away as he says, “Oh, please. We’re done here. We’re done. We’re done.”
Wubbels shrieks as Payne forces her out the door toward a police car. She screams for him to stop, saying, “I’ve done nothing wrong! I’ve done nothing wrong! Why is this happening? This is crazy!”
She asks out loud why the officer is “so angry.”

Since the incident, Wubbels and her attorney said they have met with the city and police department to encourage them tore-educatee their officers about the policy.
But Porter said they were not encouraged by their discussions with the University of Utah police and the Department of Public Safety, which provides security for the hospital. Officers from both departments were present for the arrest and did nothing to stop it, she said.

What I saw on the video last night is completely unacceptable. Mayor J. Biskupski @slcmayor