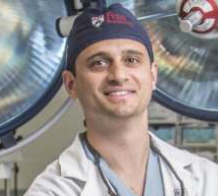 Who is the first Neurosurgeon to preform Minimally Invasive Spinal Surgery Endoscopically?

Neil R. Malhotra, MD, an assistant professor of Neurosurgery and Orthopaedic Surgery and the vice chairman of operations in the department of Neurosurgery, performed first Minimally Invasive Spinal Surgery.

PHILADELPHIA – Spine disc related low back and leg pain is a major challenge and is the second most common reason that patients visit the doctor in the United States—outnumbered only be respiratory infections—and is the leading cause of disability worldwide. Compression of the spinal nerves is one of the most common diagnoses and is frequently reversible with surgery.

Kevin Clark, 51, is one of 200,000 individuals in America who suffer with debilitating back pain, leg cramps, and difficulty standing, bending or walking due to spinal nerve compression and stenosis each year. He sought help from Penn Medicine neurosurgeons, and today, Clark is celebrating three months of being pain-free after suffering debilitating back pain, leg pain and thigh numbness for over a year. He became the first patient in Pennsylvania to undergo a life-changing, minimally invasive spine surgery through a single incision in his side that had him up and walking just hours after surgery. Neil R. Malhotra, MD, an assistant professor of Neurosurgery and Orthopaedic Surgery and the vice chairman of operations in the department of Neurosurgery, performed Clark’s procedure—called an endoscopic percutaneous lumbar spinal nerve decompression and discectomy—at the Hospital of the University of Pennsylvania in May.

Clark, a bridge inspector from Quakertown, Pa., had been experiencing back pain and numbness in his right upper leg and thigh for nearly a year. Clark previously had undergone open spinal laminectomy surgery—a procedure during which a small portion of the bone over the nerve root and/or disc material is removed to give the nerve root more space— three years earlier for nerve compression causing symptoms in the back and below the knees. He had an excellent surgical result, with 100 percent improvement of his symptoms, but he felt that the surgery recovery was tough, with incision pain lasting nearly three months. But since the surgery helped, he was prepared to do it again to get relief from his new problem above the knee. When he heard that there was another option for his problem, Clark agreed to become the first patient in the state to receive the new minimally invasive treatment. Following the procedure, Clark said, “The speed of recovery alone has been amazing. I was able to walk around without pain the same day.” He noted that he had rapid results for his different problems with both surgeries, but with this surgery there was almost no incision pain — relief without suffering the more typical side effects of surgery.